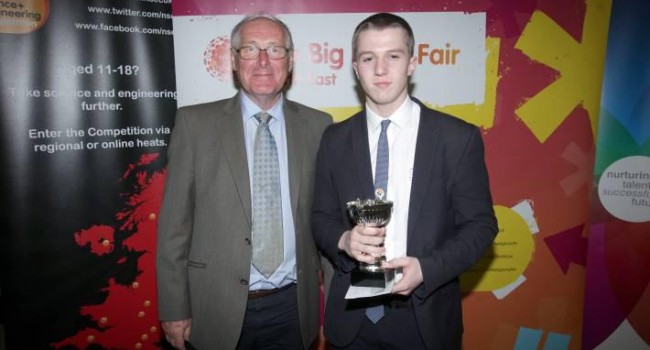 Over 60 STEM projects completed by young people across 12 categories were showcased and judged at the Big Bang North East event. A selection of the best will represent the region at the National Science + Engineering Competition in March 2015, with a chance to be crowned Young Scientist or Young Engineer of the Year and win prizes of up to £2,000.

The Big Bang North East, held on 20th June at Northumbria University and organised by NYBEP, is one of a series of events held annually across the UK which seek to enthuse and celebrate the achievements of young people in STEM, ultimately inspiring them to follow careers in these rewarding fields.

The photo shows Eric Morgan, Reece Foundation Trustee, presenting triple winner Liam Fairburn, Ponteland School with their sponsored award for Excellence in Engineering. Liam along with 13 other winners from various schools, Emmanuel College, St Bede’s Catholic School, Yarm School and Cleveland College of Art were successful in being nominated to represent the North East of England at the National Science + Engineering Competition which will take place at the Big Bang Fair in Birmingham in March 2015.