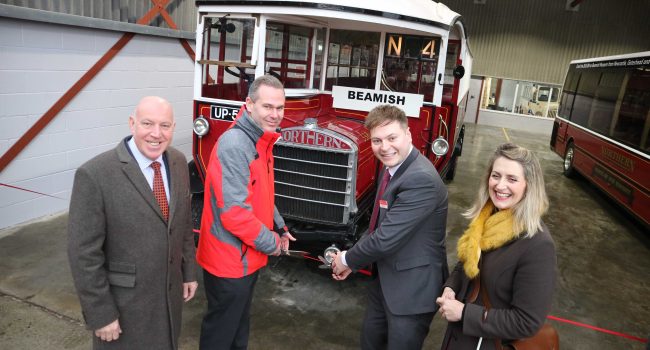 The new Northern General Transport Bus Depot opened its doors at Beamish, The Living Museum of the North, helping to preserve transport heritage and engineering skills, along with the century-old Northern name.

The depot and workshop, which is part of the £20m Remaking Beamish project, is home to the museum’s growing fleet of buses and will allow visitors to watch engineering work on historic vehicles.

Learning activities in science, technology, engineering and maths (STEM) will take place at the bus depot and apprenticeships will ensure that heritage engineering skills are passed on.

Paul Jarman, Assistant Director – Design, Transport and Industry, said: “We are thrilled to be opening the Northern General Transport Bus Depot at Beamish. With the incredible growth in visitor numbers over the past decade we have been expanding our fleet of period vehicles to meet rising demand.

“The new bus depot and associated workshop has been created to support this growth and we’re now lucky to have one of the best facilities in any museum in the UK for maintaining our fleet.

“We’d like to thank our funders and supporters who are helping us preserve the region’s heritage, including transport heritage, for future generations.”

The depot has been supported by The National Lottery Heritage Fund, Go North East and The Reece Foundation, along with local, regional and national trusts and foundations, the Friends of Beamish and the Business Friends of Beamish.

The Northern General Transport Company’s first buses began running in 1913 and the name has been preserved in the new depot. The company later became Go-Ahead Northern and then Go North East. Around 175,000 journeys are made on Go North East buses every day around the region.

Martijn Gilbert, Managing Director at Go North East, said: “We’re delighted to see the opening of the Northern General Transport Bus Depot at Beamish Museum. As a long-standing partner, it’s great to have been involved in this exciting project and to see everyone’s hard work come to fruition.

“Having operated buses in the North East for over 100 years, starting out way back in 1913, connecting communities and being a major employer particularly in areas close to Beamish, including Chester-le-Street, Stanley and Consett, it’s fitting that we’re supporting the museum with their new bus depot, which also forms an important part of keeping our history alive.”

The Reece Foundation is a long-term funder of the museum’s STEM learning programme, which provides a wide range of educational activities for young people.

Anne Reece, Chair of The Reece Foundation, said: “The Reece Foundation is pleased to support this ambitious new addition to Beamish, which will bring engineering to life for the thousands of young people and their families who visit the attraction every year.

“The trustees hope our contribution will enable the museum to continue to expand its work preserving the region’s rich industrial history while highlighting the importance of engineering in the future and the exciting careers that studying STEM can offer.”

David Renwick, Director, England, North, The National Lottery Heritage Fund, said: “It’s great to see this milestone in the Remaking Beamish project take place. We’re really proud that our investment will not only showcase transport heritage of the North East, but also help to inspire the next generation of engineers and scientists through the fantastic learning programme.”

The Remaking Beamish project is the biggest development in the museum’s history and includes a 1950s Town, with the newly-opened welfare hall, as well as plans for houses, shops, a cinema, cafe and bowling green. Aged miners’ homes will provide a centre for older people, including those living with dementia. There will also be a 1950s Farm and expansion of the Georgian area, including Joe the Quilter’s cottage and an inn where visitors can stay overnight.