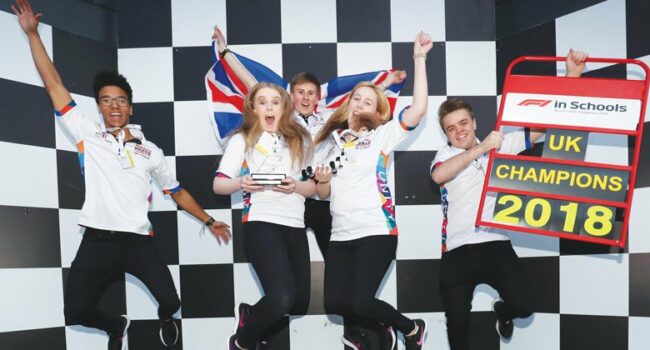 A team of Gateshead students are in pole position as they prepare for the world finals of the prestigious F1 in Schools competition after being crowned UK champions.

Team Unity from Emmanuel College will compete against teams from around the world at the event in September, which coincides with the Singapore Grand Prix.

F1 in Schools is the world’s most competitive STEM competition involving more than nine million young people from 17,000 schools in 44 countries. Students design, make and race a miniature F1 car capable of 0-80km/h (50mph) in under one second.

Entries are also judged in categories including scrutineering, engineering, verbal presentation, pit display and enterprise portfolio as well as the car’s speed being tested on the Official F1 in Schools track, a 20m long drag strip.

Unity also won the Best Engineered Car Award on their way to the UK crown with the judges commending the team on the design, manufacturing and engineering of the miniature vehicle.

Their prize includes tickets to the Formula 1 British Grand Prix next month courtesy of Silverstone Circuit, exclusive paddock access at the event from Formula 1 and a Formula 1 team factory tour.

The team is made up of manager Lucy Brooks, 17, Morgan Lisk, 16, Michael Farrell, Aaron Morris and Sam Chapman, all 17.

The students spent hours of their own time designing and constructing the model car using computer-aided design and 3D printing.

In a key innovation, they designed nostrils in the nose of the race car to create lift and reduce drag on the wheels to increase speed.

Unity team manager, Lucy Brooks, said, “It’s unbelievable; we’ve all worked so hard for this, so I think we deserved it. It’s been a long road, but so worth it. We’ve been together a long time now, so our teamwork is certainly a factor in our success.

“We have a huge amount of work now to prepare for Singapore, making sure our car is as good as it can be. We know that competing at the World Finals can open doors to careers in engineering so that is a great opportunity for us. We’re very excited to be heading there.

“I enjoyed the manufacturing of the car, this involves the machining of the car using a CNC Machine and 3D Printers, to then sanding the car and finally spraying the car multiple times.

“With the help of the project I have been able to mentor the younger teams to create a long-lasting legacy and I hope to help inspire young girls to become more involved with the industry.”

The students must raise the money to pay for the trip and have been awarded funding from businesses and charities in the region including the Reece Foundation, a long-term supporter of the F1 in Schools programme and the Nissan Foundation.

Technology teacher at Emmanuel College, Louise Glover, who runs the F1 in Schools programme at the school, explained the impact it has had on the team and other pupils.

She said: “As individuals they have grown hugely through the process, gaining a vast range of new skills and gaining confidence. Two of the team are our head boy and head girl and the rest are prefects or house captains and they are great role models for other students, inspiring others to get involved.

“When we first started the scheme five years ago, we had just handful of students involved. Now we have dozens coming along to lunch-time and after-school clubs.

“It really is a fantastic and fun way to get young people involved in STEM.”

“The North East needs more engineers and they are great ambassadors for their school and the region, inspiring younger students to get involved with the F1 in Schools programme that brings STEM to life for young people in an exciting way.

“We are proud to support them on their journey to the world finals.”

Do you need funding for a STEM project in the North East? Find out more about how to apply to the Reece Foundation here.